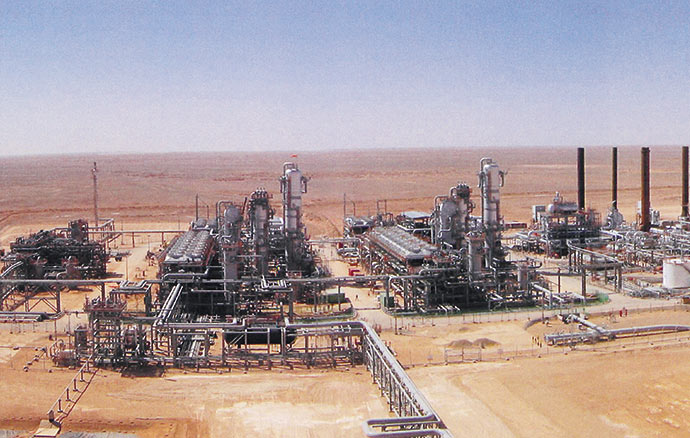 JGC formed a joint venture with KBR in 1997, and landed a contract from BP Exploration and a Sonatrach for EPC (engineering, procurement and construction) in this project, which was completed in 2004. The aim of this project was to develop northern three out of seven gas fields in the first stage of construction, scattered over the In Salah area around 800 to 1,100 km south of Algiers. The group oversaw the construction of gas processing facilities, CCS facilities, and gathering pipelines at three gas fields in the north, and the construction of gas boosting compressor station at Algeria's biggest gas production base (in the Hassi R'Mel area), as well as the basic and detailed designing of a pipeline to connect Krechba to Hassi R'Mel.

The group succeeded in massively reducing the initially planned amount to be invested in development through the offering of technology proposals and negotiations with the client by JGC and KBR at the FEED stage. JGC also won high appraisal from both BP and Sonatrach for achievements in Algeria at the time, along with the wealth of experience and refined technology, for which the company succeeded in landing the contract for this project.

Moreover to prevent the emission of CO2 contained in the feed gas into the atmosphere, JGC and KBR oversaw the designing and construction of a CCS facility for compressing, injecting and storing CO2 into the same stratum (nearby water layer) at a depth of about 2,000 m from where the gas was extracted. This was an advanced initiative at the time, and it has been contributing to measures to prevent global warming by compressing, injecting and storing around 1 million tonnes of CO2 annually into the stratum under high pressure.