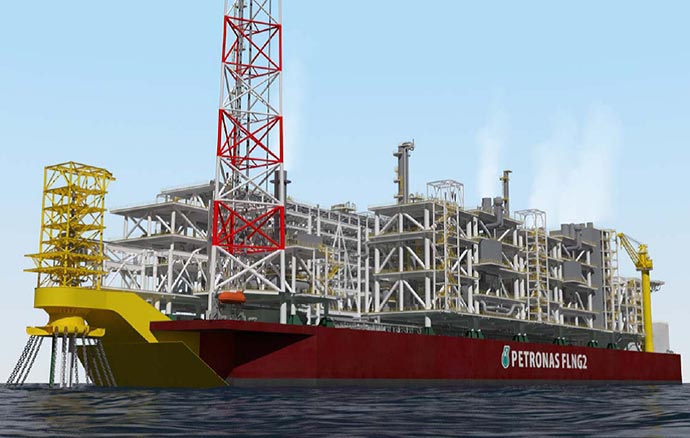 JGC formed a consortium with Samsung Heavy Industries of South Korea, and in 2012 succeeded in landing a contract for FEED work for a FLNG (floating LNG production, storage and offloading) plant with an annual production capacity of 1.5 million tonnes, and a contract in 2013 for EPCIC work (engineering, procurement, construction, installation and commissioning) at the same plant.

This was a project for PETRONAS to build a new offshore LNG plant for a gas field off the coast of Sabah in Malaysia. As the leader of this consortium, JGC has been constructing process modules, which is called as a topside, while Samsung Heavy Industries has mainly been constructing the hull.

The construction of sturdy FLNGs, which are exposed to offshore waves, is technically particularly difficult, and there are only two companies in the world which have experience of landing contracts and executing the EPC for the topside; they are JGC and TechnipFMC of France. Moreover, this FLNG plant will be the first in the world to be built for a deep-sea gas field at a depth of over 1,000 m, and it will be a pioneer project for the offshore oil and gas industry.