Yokohama, Japan- JGC Holdings Corporation has announced the establishment of JGC ASIA PACIFIC PTE. LTD. on January 1, 2022. As a part of the reinforcement of the JGC Group's sales and project execution network in the Asia-Pacific region, which is positioned as a growth market, the JGC ASIA PACIFIC headquarters will bring a strengthened framework to its regional management as sought in the long-term management vision "2040 Vision". The newly established headquarters will contribute toward the key strategy of expanding the growth markets and segments for the JGC Group's engineering, procurement, and construction (EPC) business, as outlined in the medium-term management plan "Building a Sustainable Planetary Infrastructure 2025" (BSP2025).

The Asia-Pacific region is expected to see high economic growth as populations surge. Urbanization is driving a trend toward rising numbers of facility and infrastructure projects such as water and sewage, waste to energy, railways, chemicals, pharmaceuticals, and food-related facilities. The need to meet increasing energy demand while shifting toward low-carbon/decarbonization has led to a sharp rise in energy transition projects, including renewable energy.

Starting from the 1970s, the JGC Group established engineering companies in the Philippines, Indonesia, Vietnam, Singapore, and Malaysia to execute EPC plant and facility projects in the Oil & Gas as well as petrochemical fields.

As of January 1, 2022, JGC SINGAPORE PTE LTD has been renamed JGC ASIA PACIFIC PTE. LTD. The company will take on the new role of Asia-Pacific regional headquarters and serve as a base for project execution in Singapore and nearby countries. By supporting the sales and project execution of Group companies in the Philippines, Indonesia, Vietnam, and Malaysia, JGC ASIA PACIFIC PTE. LTD. will coordinate operations across those companies, as the JGC Group seeks optimized growth across all of its companies.

Specifically, with project department and engineering departments collaborating to form an organization for sales that includes technical expertise, JGC ASIA PACIFIC PTE. LTD. and Group companies in the Asia-Pacific region will develop and be awarded projects through a solutions-driven approach based on local capability for local delivery. Projects will also be secured by providing from the planning stage full support to Japanese companies expanding into the Asia-Pacific region. JGC Group companies in the Asia-Pacific region, including JGC ASIA PACIFIC PTE. LTD., will work from their bases in the five countries with the goal of expanding the scope of projects. Projects expected to be won include renewable energy, LNG receiving terminals and gas-fired thermal power, in addition to the infrastructure-related projects mentioned under "urbanization".

The JGC Group will continue making progress in implementing the key strategies of the 2040 Vision and BSP 2025, with a full focus on meeting the targets set. 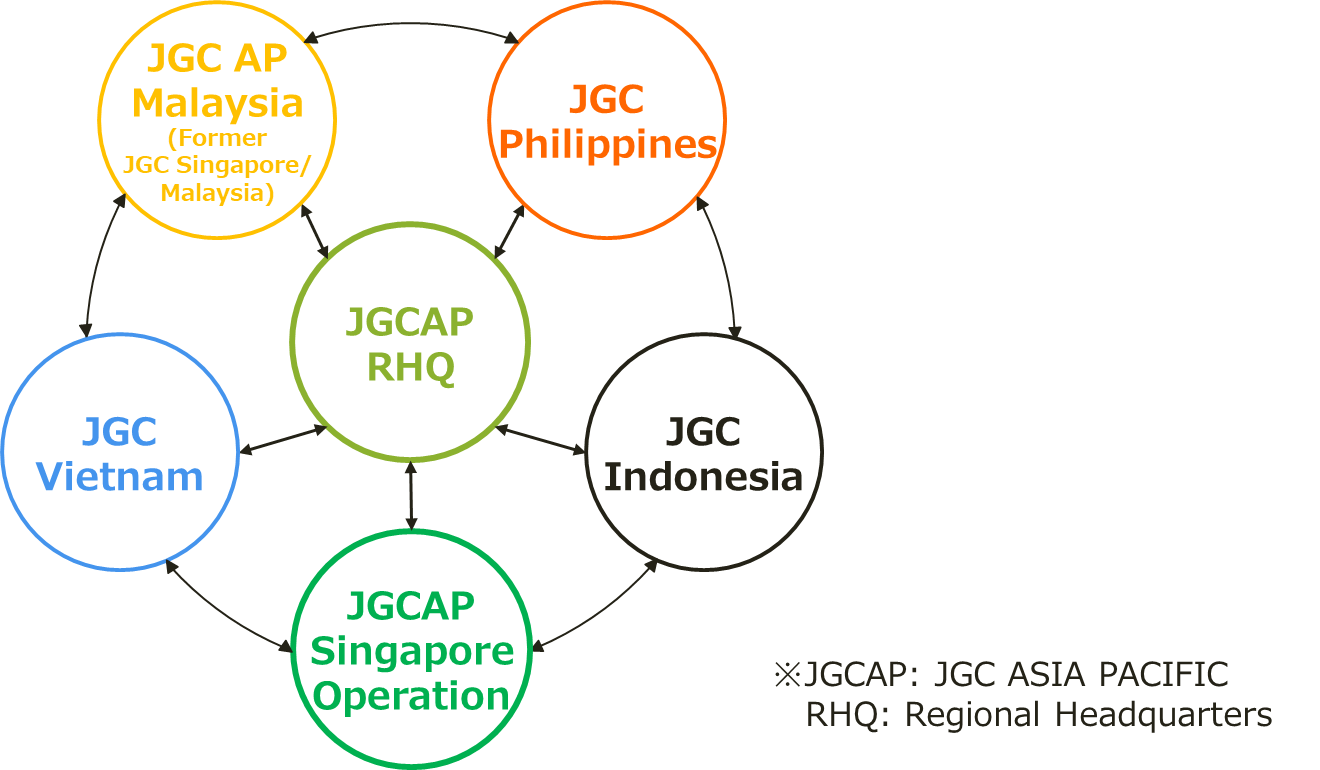