The "Ship Carbon Recycling Working Group (WG)" of Japan's Carbon Capture & Reuse (CCR) Study Group has confirmed that carbon recycled methane produced by methanation technology (Note 1) can be recognized as zero emission ship fuel. A technical paper describing the details of the calculation procedure and evaluation conducted by the WG has been published in the latest issue of the journal of Japan Institute of Marine Engineering.

Carbon recycling, which is the process of capturing and reusing emitted CO2, is becoming increasingly important as one of the pathways to realize a carbon-neutral society.

To explore the feasibility of the concept of utilizing methanation technology for zero-emission ship fuels(Note 2), the WG was formed within Japan's CCR Study Group, and started its activity in July 2020.

Since it is a basic premise for the WG's activity that carbon recycled methane can be recognized as zero-emission fuel, the WG firstly worked on the evaluation of its potential.

While International Maritime Organization (IMO) has yet to develop the rules for calculating emissions from the onboard fuel combustion of carbon recycled methane (Tank to Propeller), the importance to be cognizant of CO2 emissions in the fuel supply process(Well to Tank) has been noted. The WG has assumed and evaluated (Note 4) the following four processes as the supply chain for carbon-recycled methane fuel: (1) CO2 separation and capture, (2) CO2 transportation, (3) methanation fuel synthesis, and (4) methanation fuel liquefaction. As a result, the CO2 emission per unit calorific value of carbon-recycled methane fuel by methanation was calculated as approximately 27-gCO2/MJ (regarded as Well to Propeller).

This figure is comparable to other alternative fuel candidates generally recognized as zero-emission fuels, confirming that carbon-recycled methane can be recognized as zero emission ship fuel. In addition, further reduction to approximately 20-gCO2/MJ is expected by improving the efficiency of the separation and capture technology, and using electricity produced from renewable energy.

A technical paper describing the details of the calculation procedures and evaluation involved in this study was published in the journal of Institute of Japan Marine Engineering, Vol. 56, No. 4.

In order to verify the feasibility of carbon recycled methane as a ship fuel, the WG will continue to work on issues such as CO2 transportation by large-scale liquified CO2 carrier vessels, supply of hydrogen from renewable energy, prevention of methane slip (Note 5), supply infrastructure of liquefied methanation fuel, and economic viability. 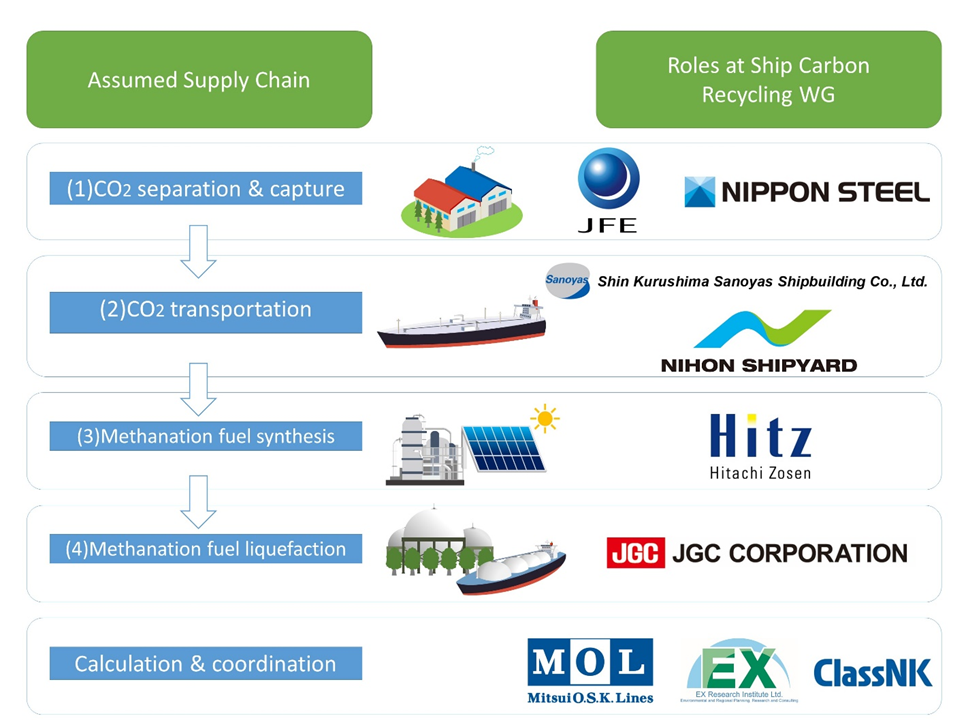