JGC HOLDINGS CORPORATION (Representative Director, Chairman and Chief Executive Officer Masayuki Sato) announces that JGC CORPORATION (Representative Director, President Yutaka Yamazaki, hereinafter JGC Corp.), which operates the overseas EPC business of the JGC Group, has recently made the decision to begin verifying the effectiveness of construction of a 3D printer at a domestic plant construction site as one part of its efforts toward the full-scale adoption of 3D printers for construction projects. This initiative to verify construction 3D printers is an advanced example even among engineering companies worldwide.

The JGC Group is actively promoting the utilization of DX (digital transformation) with the aim of enhancing its ability to compete to win orders. In December 2018, the Group formulated its IT Grand Plan 2030, a long-term information strategy that sets a target of completing EPC (Engineering, Procurement and Construction) projects twice as fast with one-third the current manpower. It is advocating the "optimization of construction techniques through the introduction of 3D printers and construction automation" as one such initiative.

This verification will be carried out as one part of the initiative, a gantry-style*2 concrete construction 3D printer*2 supplied by Denmark's COBOD International A/S (hereinafter COBOD) will be installed at the construction site of a biomass power generation plant project that JGC JAPAN CORPORATION, which operates the domestic EPC business of the JGC Group, is executing in Ishinomaki City, Miyagi Prefecture. The 3D printer is scheduled to begin printing structures in 2021, and its effectiveness will be confirmed by verifying the results its introduction generates from the standpoints of construction time, cost, quality, as well as other factors.

COBOD is a young and innovative company that develops, manufactures and sells gantry-style concrete construction 3D printers. It has a track record of sales in Europe, Asia, North America, Africa and elsewhere. In comparison with other suppliers, COBOD's products are notable for being capable of printing large structures and can be installed and used outside.

The JGC Group is actively engaged in the creation of new value through synergies with startups and with young, innovative companies inside and outside Japan that possess innovative technologies. In the field of 3D printers, where developmental advances are centering on startups and young companies, it selected COBOD's product.

The conventional construction is to assemble formwork and pour concrete into it. In contract, the introduction of 3D printers at construction sites promises to make design more efficient by offering "a high degree of freedom in the shape of structures" and "the ability to integrate multiple components," as well as make construction projects more efficient by "reducing manpower through the use of robots." The JGC Group believes that this will also contribute to further enhancing overall optimization in the EPC integrated execution projects which are its strength.

After confirming the effectiveness of 3D printers at domestic construction sites, the Group plans to move ahead with introducing them in earnest for its construction projects as a whole, including overseas.

*1 DFAM Unit: DFAM stands for "Digital Fabrication and Additive Manufacturing." It is an organization for promoting construction automation technology and 3D printer technology.

*2 Gantry-style: Refers to a 3D printer in which the nozzle can be freely moved longitudinally, sideways and in height within the dimensions of a portal frame. 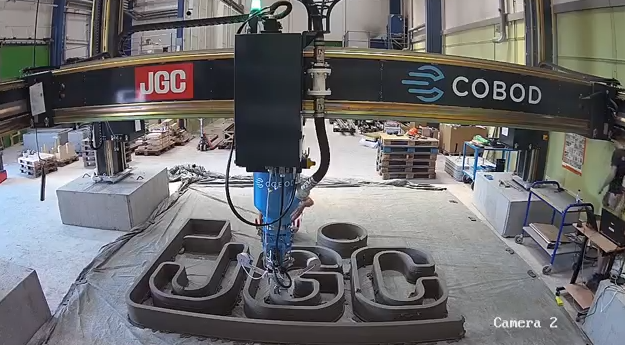 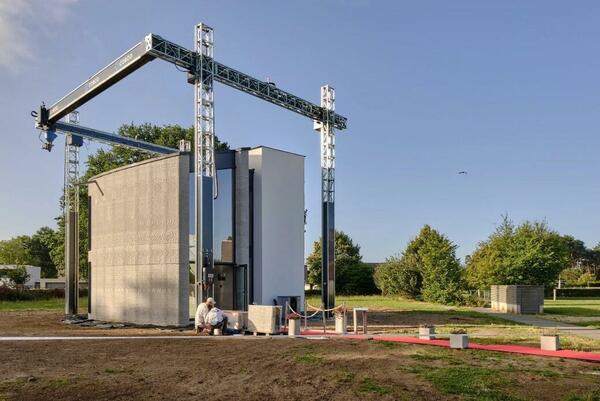