JGC HOLDINGS CORPORATION announced today that JGC CORPORATION, which operates the overseas engineering, procurement, and construction (EPC) business of the JGC Group, recently received an order for a feasibility study toward realizing the first plastic waste gasification recycling plant in South Korea, which is being planned by a major South Korean chemicals company.

This project involves carrying out a feasibility study relating to the construction of a plant for achieving plastic waste gasification recycling (with a capacity of several hundred tons a day) by utilizing EUP*, which JGC Group holds the relicensing right to. The plastic will be gathered from plastic waste sorting facilities in a dozen or more locations in South Korea, and will comprise mixed films and the plastics that remain after sorting, which are challenging to recycle. The results of the feasibility study are scheduled to be compiled by around first quarter of 2021.

Currently in South Korea, single-material plastic waste with a high degree of purity such as PET bottles, polyethylene and polypropylene are recycled using cleaning treatments and similar mechanical recycling methods. However, because of the difficulties in recycling mixed films and residue plastics, which contain a variety of materials and impurities, they are currently disposed of at landfills or by incineration. Consequently, building a framework for reusing these resources is a pressing issue within South Korea.

EUP, which the Group proposed to the major South Korean chemicals company, makes it possible to break down mixed films and residue plastics, which until now have been thought of as difficult to reuse, to a molecular level. This contributes significantly to promoting the recycling of resources. The synthesis gas produced by gasification facilities can be utilized as an alternative raw material for chemical products, and by undertaking a refinement process it can even by utilized as low-carbon hydrogen. EUP will thus not only contribute to realizing a recycling society, but to realizing a hydrogen society as well.

JGC Group is intent on actualizing an "Societies in harmony with environment" as one of the important issues (materiality) that it is addressing as a corporate group, and is undertaking broad-ranging initiatives from the three standpoints of "constructing plants and facilities that contribute to reducing the burden on the environment," "manufacturing functional materials supporting carbon reduction and conserving environment," and "the commercialization of environmental technologies."


*Overview of EUP
The Ebara Ube Process (EUP) was developed by Ebara Environmental Plant and Ube Industries. The process involves gasifying plastic waste through partial oxidation by oxygen and steam to produce synthesis gas that can be utilized in chemical compounds. A gasification plant that employs EUP to process approximately 70,000 tons of plastic waste a year has been operating at Showa Denko's Kawasaki Plant since 2003, and EUP continues to be the only technology for gasification chemical recycling in the world with a long-term track record of commercial operation.
On the basis of the EUP relicensing contract that JGC Group concluded with these three companies, the Group is advancing operations for recycling plastic waste based on the provision of EUP-related technologies from Ebara Environmental Plant and Ube Industries, and the provision of mass production technologies and operational support from Showa Denko. 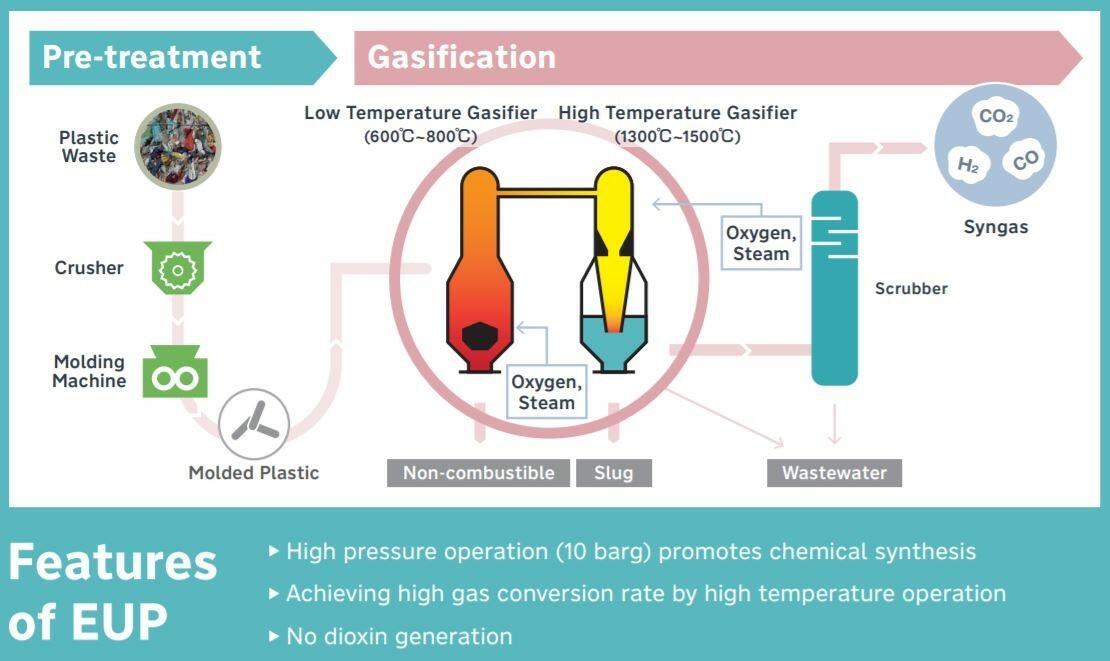