Since 2019, JGC Group has been considering a collaboration with Ebara Environmental Plant Co., Ltd., Ube Industries, Ltd., and Showa Denko K.K. for gasification chemical recycling of plastic waste using EUP (Ebara Ube Process), and is pleased to announce that JGC Corporation has concluded an EUP relicensing contract with these companies.

Based on the relicensing contract that was concluded, the JGC Group will receive EUP-related technology from Ebara Environmental Plant Co., Ltd. and from Ube Industries, Ltd., and it will receive improved technology and operational support from Showa Denko K.K. In addition, it will promote the following activities to advance the recycling of plastic waste.

It is predicted that, in the future, the movement towards resource recycling will further accelerate worldwide, and JGC Group is proposing these plastic waste gasification facilities and chemical product manufacturing facilities using synthesis gas produced from gasification facilities for related industries such as petroleum, petrochemicals, and chemicals, which will be expected to strengthen their efforts to recycle plastic waste.

Hydrogen can be produced by refining synthesis gas produced from plastic waste through EUP, and JGC Group is proposing a "local production for local consumption hydrogen model" to hydrogen manufacturing companies, etc., which would produce low-carbon hydrogen from waste plastic generated in urban areas, and then utilize it for power generation and fuel cell vehicles.
Regarding hydrogen utilization, JGC Group has focused on the superiority of ammonia as a hydrogen energy carrier,* is currently working with governmental agencies, a research insititute and partner companies to establish ammonia production technology derived from renewable energy and a supply chain of CO2-free ammonia, and is developing activities from a wide range of perspectives for the arrival of a hydrogen-based society.

Efficient methods for storing and transporting hydrogen, which in its gaseous state is inefficient to store or transport over long distances, by liquifying hydrogen or turning it into a hydrogen compound. Ammonia, which contains a large amount of hydrogen in its components, liquifies at a relatively high temperature, so it is attracting attention as a hydrogen energy carrier because it is easier to store and transport for long periods of time than other energy carriers, because it can be burned directly as ammonia, and because it does not emit CO2 during combustion.

3. Building a Value Chain to Realize the Recycling of Plastic Waste

In order to promote recycling waste plastic, it is necessary to build a value chain, from securing raw materials to manufacturing and sales, and JGC Group recognizes that ensuring traceability to guarantee the environmental value of manufactured chemical products and hydrogen from waste is also an important requirement.
JGC Group is working not just on its aforementioned proposal for plastic waste gasification facilities and chemical product manufacturing facilities using synthesis gas produced from gasification facilities and its proposal for hydrogen production equipment using plastic waste as a raw material, but is also focused on building a value chain in collaboration with governmental agencies, local governments, and industry (trading companies, financial institutions, petroleum / petrochemical / chemical companies, waste plastic collectors, etc.) and is working to promote gasification chemical recycling of waste plastics from a comprehensive perspective.

In response to the plastic waste problem, which has become a global social issue of late, gasification chemical recycling of plastic waste decomposes plastics containing dissimilar materials and impurities, which are difficult to recycle by other methods, at the molecular level, and then regenerates them into a variety of chemicals such as ammonia, methanol, and olefins, that can be used as raw materials for plastics, rubbers, and chemical fibers. It is expected that this process will significantly contribute to improving the waste plastic recycling rate.
The EUP developed by Ebara Environmental Plant and Ube Industries is a process that gasifies plastic waste using partial oxidation with oxygen and steam, producing synthesis gases that can be utilized in the synthesis of chemical products, and a gasification facility operating at Showa Denko's Kawasaki Plant (annual plastic waste processing capability: approximately 70,000 tons) since 2003 applies EUP. EUP continues to be the only technology for gasification chemical recycling in the world with a long-term track record of commercial operation. 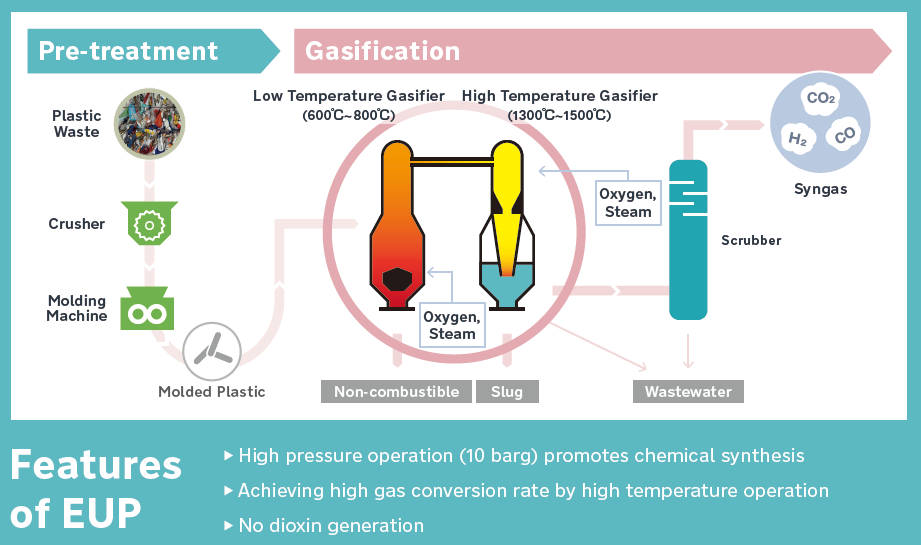 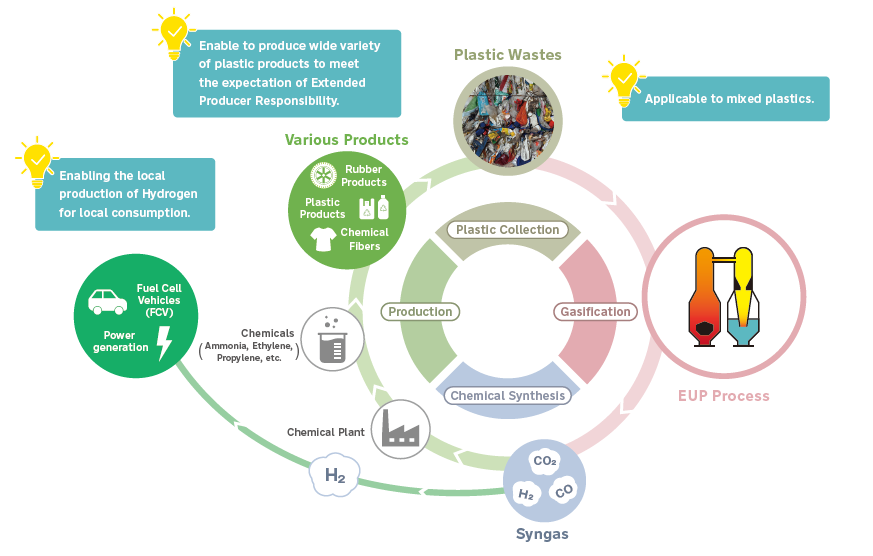